It is black and white! (please read the entire text)

I want to start this text writing to people from the LGBTQ+ community.

It is important to set some bases for this text and I would like to do so below:

1) I love people! It is important to mention that, otherwise people may lose focus. However, I love people not because they are straight or gay or anything else, but because people were made by God and were made to resemble God.  So please understand that I love you, no matter your sexual decision or inclination. No matter your political affiliation or even if you like me or not - I do love you and any Christian that takes God seriously is commanded to love one another (and there is no if's or but's in that).

2) I do respect your right to decide what you want and how you want to live your life! That is guaranteed in the law of the land and in the bible. God gave us free will and I don't want to take that from anyone (me or you - gay or straight, Brazilian or British).

3) Any member of the LGBTQ+ community is welcomed and will always be welcomed in the church that I am pastoring (whatever the name and denomination). Anyone (gay or straight, black or white, Manchester city or United supporter) are welcomed and will be encouraged to be part of a community where we can belong even before we believe.

4)  I want to reinforce (just in case there still any doubt) that any case of homophobia, racism, discrimination or prejudice against ANYONE because of their sexual decision/orientation, or colour of their skin or race is a SIN and it is crime.  It is imperative that the church and the wider society don't accept any form of racism, discrimination, prejudice or homophobia - that is wrong and evil, and as any crime should be reported to the police and authorities.

5) I support and believe that any form of a partnership should have a legal form to protect people from difficult situations. As such I believe that two people (no matter their gender) that are in a relationship and building their lives and wealth together should be able to legally do so, and in this way protect people and any other family members their rights and heritage.

This "legal protection and contract" should and needs to be done and reviewed when necessary by the government, not the church. It is the role of the government to protect the rights and heritage of its people, and as such, the government needs to legalise those "contracts" to establish the rules and regulations that will govern the partnership between people (doesn't matter if they are married or not).

When we speak about church and church teaching we need to be clear that the foundation of our teachings and belief is not the government or the society, but the Bible.
The government should control how society is organized and the church shares and proclaims the rules and guidance of God, to the people that are willing to walk in accordance with his will.

When and if the church stops following God's guidance and rules and start to follow people's ideas or the government direction that group is no longer a church of Christ, but a club of people that are likeminded in pleasing other people instead of God. And I definitely cannot serve and live or be part of such institution.

With the bases of the understanding above, now I would like to discuss how and why Christians (not all Christians must be said) are opposed to having a marriage between two people of the same sex.

First of all, it is not a lack of love or a judging finger that make Christians defend their view and position. Also, it is not based in disrespect or not welcoming people - because of all that was discussed and mentioned above on the text. And neither is a tendency to force people to live a life that I want for them. None of this would be right and honest!

Many Christians (I included) opposed to accepting the marriage of people from the same sex not because we are perfect people or people without sin. I can guarantee that I am a sinful person and everyone in my church and everyone that I know are sinners and all needs God's grace.

And the Bible is consistent throughout the Old and New Testament mentions that the original (perfect) plan of God is that a man and woman leave their families and become one family under God.  There are many texts that confirm that as for example:

The texts above were written and defended in various scenarios and situations, and the will of God has expressed in many moments that the perfect plan of God is that man and women become one flesh.

So for me (and many other good Christians) homosexual marriage cannot be blessed, taught or celebrated in the church because it is against God's manifested will and guidance to his people. God always has a better way, and his better way may be and many times will be different from ours. However, some people may ask: If you think that it is sin and you are also a sinner why don't you bless the relationship? Isn't that hypocrisy? No, it is not! I am a sinner (a big one) but I don't say that my sins are not sins anymore, or that it is ok to conform to those sins and be blessed to live with it.

Every sin must be repented and left in order to achieve (with God's help) the best life that is the manifested will of God to us.

In this way we love the person in a same-sex relationship, we will welcome and will work together as people that need grace and mercy, but I cannot accept or bless something that is against God's law.

At the present moment, the Methodist Church in Britain is reviewing its understanding of Marriage, and if the proposal passes will allow same-sex marriage in its premises, and as consequence will change its definition of marriage, becoming the union between two people.

My position is the defence of God's will and perfect plan to the human race, that a man and woman should leave their parents and be united before God.

We are not against people or anyone willing to be part of the so-called "gay marriage", but we are (my local church and me) proclaiming and fighting with the national church that is stopping to following the bible and that is starting to open concessions.

The church of Jesus Christ on earth and the Methodist Church as a small branch of this three have no right or authority to change God's rules and guidance. His plan's still the better plan to our lives, and a transgression of His plans still problematic and will result in death to people and the wider society. I decide to love, I decide to speak the truth - even if this cost my job, my reputation and my freedom!

I decide to offer the grace and freedom and mercy that I would like to receive, and on that way anyone is welcome, and everyone is equal. But I am not called to preach what people want to hear, but what God says, and he doesn't change!

So the conclusion that I come is that in order to love anyone in homosexual practices or any other activity that is against what God's word says, even those things that I do we should:

1) Welcome everyone in love;

2) Never call anyone by their sins, or with mocking nicknames (that is sin and it is a crime)

3) Remember that we are all sinners;

4) there is no bigger or small sin;

6) We don't say about this sin in every service, or in every moment - but when is appropriate and necessary I will be honest and say what the bible and God wants. Nothing less and nothing more.

7) God has a better plan, and that is how we can share with people that are yet not seeing the whole picture from God.

8) The fact that some churches are approving the mistake should not be a surprise as the bible says in 2 Timothy 4.2-4 "Preach the word; be prepared in season and out of season; correct, rebuke and encourage—with great patience and careful instruction. For the time will come when people will not put up with sound doctrine. Instead, to suit their own desires, they will gather around them a great number of teachers to say what their itching ears want to hear. They will turn their ears away from the truth and turn aside to myths".
2 Timothy 4.2-4

We will keep the focus on the Lord and His word, that is the best for us and the community around us!

Hope that the Lord bless you and keep you!

So for me and my house, we understand that the word (God's will) is very clear - Marriage is between a man and women). 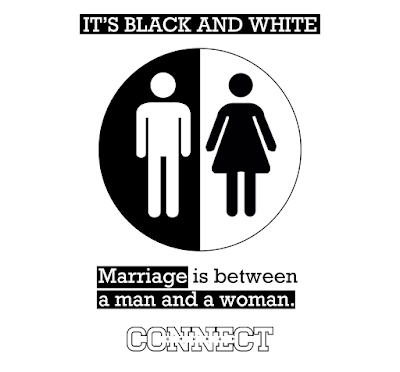 Text: John 2.5 Icebreaker: How do you feel when someone listens to your advice and as consequence has a good outcome? Imagine an amazing we...